Here's the thing. Something weird happened, and I'm pretty sure I've got an answer for it, but since I am not able to collect proof, I'll just tell you about it and let you draw your own conclusions. As for me, I love thinking about it and getting that delicious thrill every once in a while.

I needed a new clock radio. No, I did not buy one that was mysteriously possessed by a demon from another plane (though my iPhone may be, I'm not real sure on that one). Sunday afternoon, I went upstairs with my new clock radio and attempted to set it. It kept blinking 12:00 at me, even though the instructions were quite clear and simple. I got frustrated and yelled for B, who was watching a movie downstairs, to come up and help me.

He paused the movie and came up, and we sat on the edge of the bed and he helpfully read the instructions to me. Our two dogs and two cats were up there as well, everyone lying about being helpful while the clock continued to blink 12:00. And then, in the silence of all that helpfulness, we heard someone say, "Hello!" from downstairs in the living room. A sort of, "Hello! Anybody home?" kind of "hello." We froze, then B jumped up and ran downstairs, grabbing a curtain rod that I've been meaning to put up on his way.

There was no one downstairs. The front door was locked, the movie paused (so it wasn't the t.v.). He went outside, but our neighborhood was quiet, no one out, not even a car going down the street. He went around the outside of the house, then checked the rooms inside, including the basement. Meanwhile, all the pets were unfazed, even though I saw one of the dog's ears go up when we heard the "hello."

I crept down the stairs, with the box for the clock radio as my weapon should there be an intruder. And then he looked at me. "You heard that, right?" I did, I said.

Freaky looks were exchanged, and then he shrugged it off, while I have continued to privately thrill. A ghost! Saying hello!

Probably not. But the neighbors on either side were gone for the weekend, so I've really got no good answer. Part of me says there is an answer, but if that answer is not the scientific one and a ghost does reside in our house, I'm glad he's the friendly chap kind of ghost and not the melting-face, screaming kind.

Email ThisBlogThis!Share to TwitterShare to FacebookShare to Pinterest
Labels: ghosts

Beta Reader Requested! -- All Set, Thanks!

Beta needed: Spec-fic/romance, 5300 words. A little peyote before reading might be helpful.


Normally, I'd know who to ask, but I'm not sure who would be interested in this particular genre mash-up. So, if you've got some time to beta/crit, I'd appreciate it.

This little guy is so adorable. I must have him. 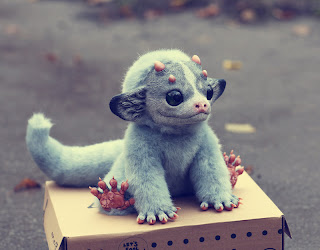 My Little Dragon, Pearl by Santani

He stands 8 inches high, and is made out of fimo (yes!) and assorted other materials, like fur and wire.

Poetry: Love in the Time of Listeria


Love in the Time of Listeria

On a quest for
cantaloupes  free of disease,
she parted the yellow curtain
and saw Mr. D alone
with his thoughts and a parakeet
in a bamboo cage

These fruit sellers, she
thought,
and was instantly attracted
to his mustache and white jacket and his
boxes of Fuji apples and
Gala and
Mandarin oranges in blue netting
and yes, there, there were cantaloupes
but each was split open, oozing old gold
seeds and ochre pulp
and Mr. D’s hands were colored with it, covered,
each finger.

When he saw her,
there between the curtains,
the parakeet made a sound like
choking on fruit
swallowing entire bananas
He was disgusted by the sound
But she said nothing, kneeling
in the mash
among the wet crates
scooping the flesh of warm cantaloupes
into her mouth.

Out on the street, that long
hot afternoon, it was July and then August
but behind the yellow curtain,
there were persimmons and Granny Smith
apples,
dragonfruit,
figs shoulder to shoulder,
all edible things, smooth and spined,
cut open
for them both
to eat. 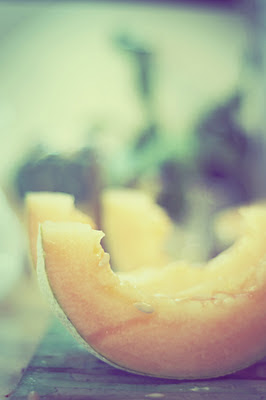 On an unrelated note, a search for "Listeria" images resulted in a disturbing number of female original characters drawn and named by people who thought Listeria was a pretty girl's name. Overwhelmingly teenagers, it's a sad fact that many of them not only think that they made it up, but that they don't even know what listeria is.

Now if you'll excuse me, I must return to working on my book. I've reached the part where the planet Bacterium is being threatened by the evil overlord, Paresis, and his sexy henchwoman, Herpes. Never fear! Our hero, Phage, will fend off those scurvy villains once again.