Fic: Gifts to Give Goth Girls

Gifts to Give Goth Girls

He'd been preparing since the night of the horror that was Thanksgiving with his family; that is to say, staring into his plate of apple pie, he'd thought that he should think about what sorts of Christmas presents she might like, but he hadn't got much farther. With four days to go, and the Mayan apocalypse nigh, he thought maybe an LED lamp or Swiss Army-type tool. Practical, in case the end of the world did occur, and besides, the electricity in her apartment had just been shut off for the second time this year and it was quite gloomy after five o'clock.

Of course, when she broke up with him for giving her such stupid presents, she would have a lovely weapon with which to gouge, slice, nick and ram him to death. Perhaps a pashmere scarf: not pashmina, nor cashmere, but soft, and it came in black.

And the lamp, he decided at the last second.

So armed, he met her at the coffee shop down the street. They've never discussed exchanging presents, and he thought how clever of him to give her something this night: all the pressure off, really, and he could show her that he knew a little something about her particular subculture by wishing her a happy Saturnalia. Already seated, she rolled her eyes and responded that she wasn't Pagan, idiot.

He handed her the box with the scarf, and watched as she gleefully ripped the Jack Skellington paper off and took it out and fingered it. It was only a scarf, he saw now. Impersonal, made in China, and fringed. Fringed. What Goth girl wanted knotted fringe?

He gave her the second box. Showed her how the lamp worked. The grumpy barista shielded his eyes, spilled steamed milk on his hand, and made noises to his fellow employees that he was sure meant, "Uncool, dude. Uncool."

It was a disaster.

Except that she rose from her seat, black tunic flowing over black leggings, put on her puffy silver coat, and led him out the door, back to her apartment.

The bright white of the LEDs suited her. Washed in their light, her pale skin turned a luminous blue-white. They wriggled underneath seven layers of comforters, and the only thing she wore was the scarf, which she took off halfway through and wrapped around his neck.

If the world did end, he decided, that would be just fine. She kissed his shoulder with lips much pinker than usual and snuggled into him, the ancient radiator clanking into life like a grumpy barista. It was a non-holiday, faux apocalyptic miracle.

Email ThisBlogThis!Share to TwitterShare to FacebookShare to Pinterest
Labels: fic

we are climbing and the clouds are gray where snowflakes come from still your voice is sweet almost a trap i have put the trap around my own leg like this see how I do it? please watch please know that I am bleeding here in the sky with your voice

every snowflake is the same

the first snow is not as important as the last

when will you look 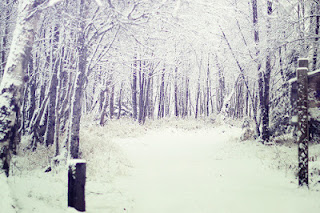