Thanks for the Memories


Well, he started collecting old issues of Rolling Stones. Said they were better. I read through like Shiva to see destroyed bands, has-beens. What the trees said when all this was printed: I really like that Fall Out Boy. They might last forever. As long as pinecones fall to earth. There's still a pinecone with your mother's name on it, you know. In an old box in the basement, waiting for gold glitter, to become a Christmas ornament in sixth grade. Better than the pomander from third grade. That year, we had a boy in class, he threw his desk over and kicked the radiator. We kept our eyes on the models of the galaxy we were building. Even then, as he passed in righteous fury, out the door into the hall, where the lights were always left low, we dreamed of other days.

The people asked for tomorrow. Can you believe that? It makes me cry, but like Ganesh I give it to them. There are no old issues of Rolling Stone in tomorrow; heed the warning. Take with you the pinecone, the scent of twenty-nine million years wrapped in your hand. Ask the band to play on. Remember third grade, for third grade will be gone tomorrow. So will the galaxy. Not the paper one – that one is still spinning, wobbling on wire bent by nine-year-old hands.

Whatever you collect, it will last forever, until tomorrow. Sweet—Good—Darling, 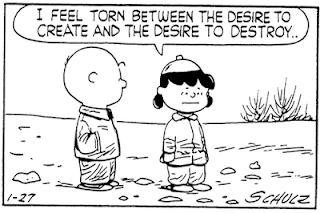