Only two days left to vote in the Grimdark challenge over at Fantasy Faction! Thirteen flashfic stories of the grimmest, darkest horrors around. One of those is my own entry, Chirp.

No mention of party cake in any of the stories, I might add. An oversight, which I'll try to correct in future grimdark stories.

Finished Chris Beckett's Dark Eden, which won the Arthur C. Clarke award last year. It was not what I expected, and in fact, was so different from anything I've ever read, that I'm still having muddled feelings about it.

John Redlantern is one of 532 people in the Family, who are all descended from Tommy and Angela. Approximately two hundred years ago, Tommy and Angela, along with three others, crashed their spaceship on a planet after having, presumably, crossed through a wormhole from our galaxy. This new planet is nothing at all like Earth, although it is capable of sustaining life, and when their ship is unable to return, they send the three others in another ship that is also damaged but may be able to make the journey back. Tommy and Angela procreate while waiting for someone to rescue them, they live and die, and the family continues on, intermingling, increasing their numbers, and holding on tight to the stories Tommy and Angela told of a place called Earth, where the Sun shines and there is technology they can't begin to understand.

The Family lives in one valley, where the ship originally crashed, and is divided into groups. They hunt and fish and have sex indiscriminately with one another. If their culture is beyond imagining, then so too is their world, which has no sun but receives red and blue and yellow light from the trees and creatures, which all have light-emitting globes.

Eventually, as it has to happen, one person wonders what is beyond their valley, and what if no one from Earth ever comes for them, and how will they survive as resources dwindle. John Redlantern is only fifteen, but he has ideas and a restlessness that makes others in the Family uncomfortable. When he decides to speak his mind and then act on it, the Family begins to fragment, and real violence comes to them for the first time in their two hundred years.

Despite being fast-paced and eventful, Dark Eden is also thoughtful and questioning. The secondary characters are fleshed out well, and Beckett seems to have considered a multitude of issues that would arise in such a particular situation.

Most of those who did not like Dark Eden seem to have had a problem with the language, which has, naturally, degraded over time from the English that Tommy and Angela spoke. In addition, the entire concept of five hundred people descended from only two, and the incest (and all the genetic problems that come from such inbreeding) make for a very, very strange experience. However, John and the others are so incredibly human, and the storytelling so vivid, that the book ceased to give me a headache by about a quarter way through -- yes, I found this book so strange at first, so difficult to comprehend, that I had a headache trying to understand it. But once I grasped it, I was along for the ride, and read it very quickly.

It's a challenging read in many aspects, and worthy of praise and awards. The ending was sort of a letdown, and that's my main criticism of it. I understand, I think, why Becket wrote it that way, but I'm not pleased.

I do highly recommend Dark Eden. You absolutely won't read anything like it.

Pretty sure that before "party cake" flavoring arrived on the scene a few years ago, my life had a dreadful hole, a void of which I was unaware, and yet, I knew that something was missing. Something with buttercream and sprinkles.

Enter Turkey Hill's Party Cake ice cream, my introduction to the flavor and still the best use of the flavor anywhere: 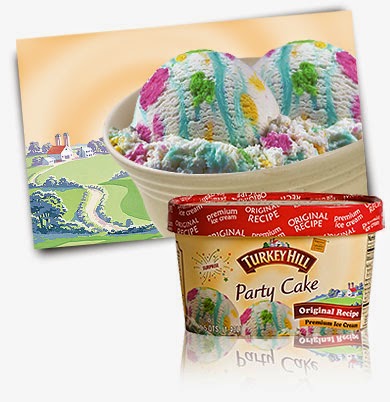 TH's version has a soft vanilla ice cream with blue buttercream and colored cake chunks. I LOVE IT.

Lately, party cake has seen a proliferation of uses, beyond ice cream, and in the interest of science, I tried a few of them. Research, my friends. Research. (or, as Jesse Pinkman says, SCIENCE, bitch) 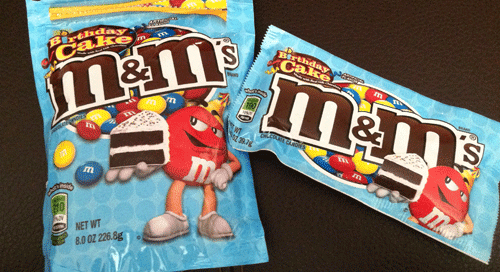 Supposed to taste like chocolate cake with vanilla frosting. Tastes like your basic M&Ms with a slight vanilla addition. Not worth it, IMO.

Next, DQ announced its confetti cake ice cream, which can be served in a waffle cone. I about had a heart attack when I saw that on t.v. Waffle cones, yes yes yes. So off to DQ we went. Over ten dollars later, we had two of these abominations: 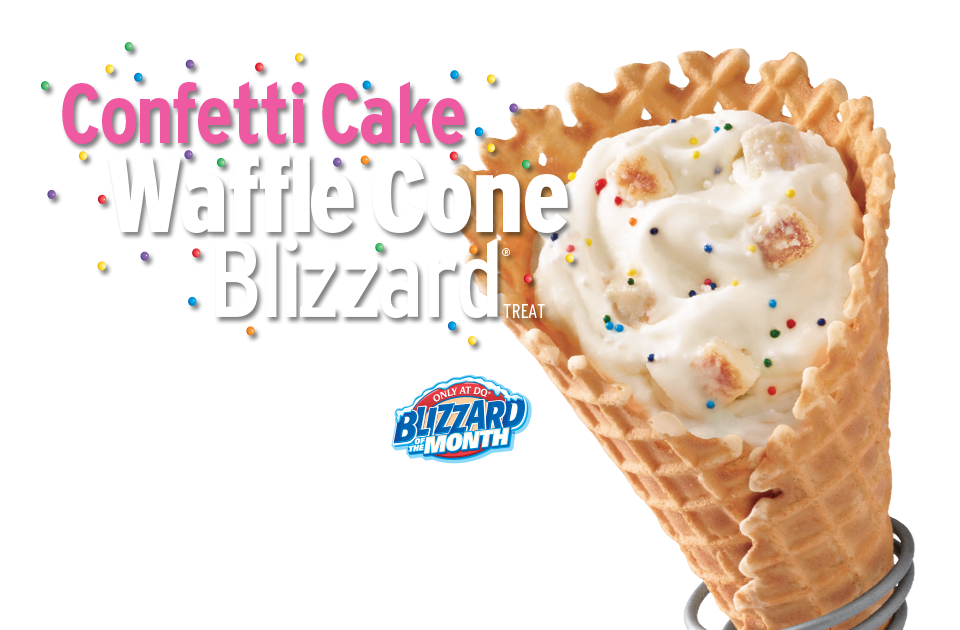 First, where's the icing? I want to taste some buttercream frosting in there, not just the basic DQ vanilla soft serve. Second, the chunks of cake were few and far between, unlike the goodies packed into TH's ice cream. Last, and the death note on this one, the confetti/sprinkles are itty-bitty pebbles of astounding hardness. Like crunching gravel in my soft serve.

Bleh. Save your money on that one. (my sister tells me that the strawberry cheesequake, however, is well worth every penny)

The final experiment was Party Cake Peeps, which also sent me into a tailspin when I saw them in CVS. Had to have them on the spot: 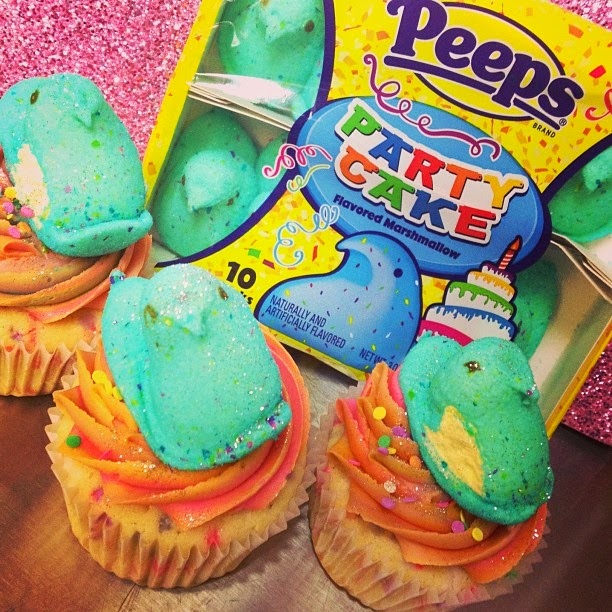 PCP (heh) are a rather frightening shade of bright blue on the outside, yellow on the inside, with bits of colored flecks that are, I gather, supposed to resemble sprinkles. How do they taste? LET ME TELL YOU.

I will eat them forever. I didn't think anything could be better than a regular peep (those chocolate covered ones, blech), but these are WONDERFUL. As you can see from the pic, people are already using them to top all kinds of baked desserts. In this case, it was funfetti cake cupcakes. Funfetti is itself an entire category, and useful in making all sorts of things, not the least of which is funfetti waffles, which are every bit as delightful as you might think: 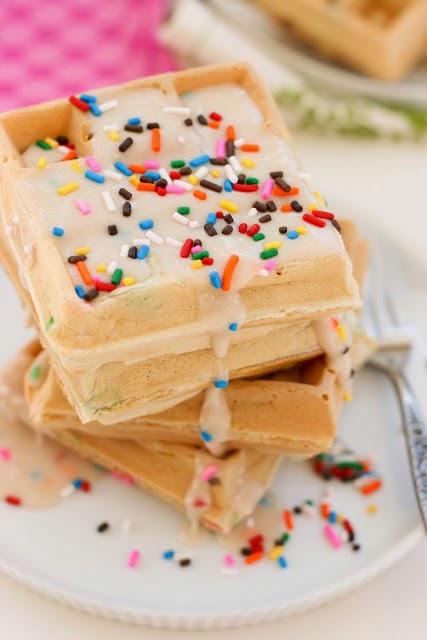 So here's the deal: Turkey Hill party cake ice cream and Party Cake Peeps, big thumbs up. So far, everything else... meh.

This is an on-going experiment. I shall endeavor to try any and all versions of birthday cake/party cake/confetti/funfetti foodstuffs as I find. Because SCIENCE, bitch.


The "little faces" of Vonda McIntyre's story are "companions," ostensibly parasites that exist within the body of a race of female humans (humanoids?). Each one is valued and loved by its host, as they contain the memories and genetic code of past lovers.

There's some strange sex going on in McIntyre's story, and that's the tip of the iceberg. McIntyre has creatively envisioned a universe in which people exist in partnership with organic "ships," which provide them with their individual homes and everything a person could want, from furnishings to sustenance to clothing. A fairly solitary existence, which may span many, many millenia, they do form friendships with others, take lovers, have social gatherings, etc. It is the morning after one such coupling, and Yalnis has awoken to blood: her primary companion has been slain while she slept, by the companion of one who she took into her bed.

Little Faces never loses its sense of oddness, of a totally foreign place, and the immersive details continue to ripple outward as the story progresses, until the reader is so entrenched in this place, that it's difficult to imagine that it doesn't exist, after all.

The story could be a metaphor for women's social interactions in the present time, or it could simply be a brilliant SF tale unlike any you've read before. I'll go with the latter.

Angry Robots, in conjunction with SFX Magazine, is offering two free books this month: Lauren Beuke's Zoo City and Adam Christopher's Empire State. As I've already read ZC, I picked up the e-pub version of ES, which came out last May and has been on my wishlist ever since. If you haven't read ZC, it's pretty damn cool.

You can find out how to get them here.

As a sidenote, SFX Magazine has Jon Snow and Dany on the cover (well, the actors...), and I've just picked up HBO again and have been catching up on my rewatch of GoT, and it's hard to concentrate on anything else when OMG GAME OF THRONES IS BACK ON SUNDAY!