A very short film that has won numerous awards, The Maker is haunting, beautiful, and slightly heartrending. And no, you do not know where it is going. Exactly.

Via Art of Darkness

Now if you'll excuse me, this is a Sunday for leftover turkey soup in the crock pot (yay!), staying in pj's, and an extended-version LotR marathon. And then maybe some Wii Sports. Because everything else today will turn me into a candidate for soup.
Posted by R.S. Bohn at 8:40 AM No comments:

The Science of Folly

The Science of Folly

War's end, and only a cat braves the molten fields of A—. It picks its paws delicately, quickly, so the burnished turf doesn't singe them.

The lead mouse in my pocket heats in my hand. How long before we are all three-eyed, or dead, or worse? Evolution will careen off-track from here, bowling us over, mowing us down and lifting us to satellite heights of deformity.

If I spin the mouse six times in the air, the genome finishes. An abrupt last gasp. Nature – true nature – will take its course. The planet may yet be green again. If I let the mouse drop, well... Armies will rise like none ever seen, ever imagined.

The cat has crossed, and jumps atop rubble, stopping to lick its poor paws. I offer the wary creature the mouse. It declines.

Such intelligence doesn't deserve to witness what is to come. I break its neck after dropping the mouse.

Yellow water puddles nearby, and I sip, for the radiation martini will be all the rage soon. One in four will consume it. Of those, eight of ten will die. The other two – my brothers and sisters. We will all be angels, and I will no longer be alone.

Found this board on Pinterest and fell into the green abyss: Memento-Mori FYI, there are a few somewhat disturbing images, such as radiation burns. But most of it is of installations that have fallen into abandonment, first-warning radar towers, Chernobyl, and the like.
Posted by R.S. Bohn at 8:29 AM 4 comments:

Alone and lonely is not a human condition only – through passing windows on the C deck, Frost could see it: In phosphorous and enameled star light, the brunt of the cosmos' joke, tumbling and dripping in a wasteland of the collective imagination.

"What is it?" asked Nina, peering through the clouded glass.

"Nothing," said Frost. "Isn't it beautiful?"

She nodded, and her eyes were that of a forest creature, dumb and wide. How had he once loved her so?

Hours later, in their tiny cabin, it passed through as a ghost, and in its vorpal wake, thus slept Nina, red froth and foam all around. Frost sighed, unburdened, and determined, for he had heard its silent reverberating scream.

He opened the door, mome raths skittering at his boot step. Along metal corridors he searched, calling softly, "Captain? Captain?"

And found the beamish boy at last. 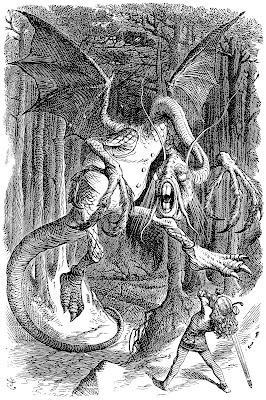 The Jabberwocky is us, and we are it.

In related news, I composed this thinking, over and over, Pigs In Spaaaaace!