Fafnir, Orm, and "The Long Ships"

It's the sad dragon who guards the gold of men, sighed Fafnir's mother.

"Well, what would you like me to do? Go about burning villages and battling noble knights?"

"Oh, and that worked out so well for him." Fafnir mimed getting stabbed in the breast with an immense sword.

"Do not talk of your father like that! He—He—" Fafnir's mother began to sob, her tears sizzling on the rocky floor.

Fafnir's mother lifted her red-scaled head. "Oh, Fafnir! Would you do that for me?"

So Fafnir slithered out of his mother's cave, with her words of encouragement at his back. How proud his father would be! How much glory to the name of dragon would he bring! And if the princess was single, how much the better!

Still, as he rose into the sky on leathern wings, the fire in his belly tumbled about with sullenness. It had been warm inside the cave, and outside it was all gray clouds and snow-capped pine trees, and soon, angry, shouting Norsemen.

One princess, he told himself. One, and he'd go back home and she'd be quiet for a year. 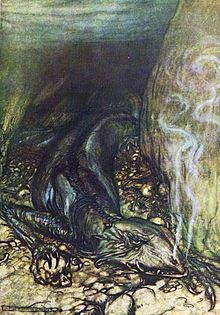 Fafnir has exactly one mention, in a single sentence, in the epic "The Long Ships" by Frans G. Bengtsson. It's near the end, and I do think they should've put more dragons in, earlier. Not that I was not entirely charmed by brave Orm, but more dragons never hurt.

"The Long Ships" details Orm's journeys as he goes a-Viking throughout much of Scandinavia, brutally slaying men and making up poetry on the spot, both of which are things I am incapable of, so I found much to admire. He serves exotic lords and becomes lovesick and then, further, refuses to take the birch to his wife. He carries a little priest beneath his arm. His hounds are enormous, his luck unusually good, and the slightest cough or scratch will make him take to his bed and mourn his impending death -- multiple times.

Throw in a best friend who, frankly, can't handle his liquor, treasures and ransoms aplenty, and every page chock-full of humorous reminders that people never change, and you've got a stellar account of life a thousand years ago.

For a tale written in the 1940s about a man who lived about a thousand years ago, this book is incredibly fresh and witty. I love, love, loved it.

Thanks much to A, who sent it to me after I asked what it means to be Swedish. I want to send back a book that might say what it means to be American, but I'm not sure that can be easily pinned down. My thoughts initially ran to Flanner O'Connor or Eudora Welty, but that might be the America of a different time and place.

At any rate, if you're looking for a great book to completely envelop you in 2013, you can't do better than "The Long Ships."

The Afterlife, or Why Do Spiders Hate Me?

I think of the afterlife as some sort of statistical analysis program I get to question. How many gallons of honey did I drink? How many men did I fool around with but not actually fuck? How many whole apples did I eat -- not counting applesauce and apple pie, etc, but whole apples, and how many were eaten at the orchard directly upon picking when I was between the ages of eight and thirteen? How many dog kisses did I get? How many times did my sister and I fight, and of those, how many ended with one or both of us receiving new scars and/or having hunks of hair ripped out?

After the stats, I will move on to the non-statistical questions. There are Big Questions and there are little questions. Did I really eat any spiders while sleeping with my mouth open? Did spiders, in fact, have something against me and wage small spider wars that resulted in numerous bites on my thighs and butt? Why did they bite my thighs and butt? What happened to my cat Jinx, who ran away after my boyfriend threw her out of the house because his aunt was coming to visit and was allergic to cats? Did anyone ever have a secret crush on me and I never knew?

I imagine that the person or celestial computer in charge will get tired of me. A pest. As on earth, so it is in heaven. I think it would be best to bring strawberries as a little gift, just a handful, very red and ripe. Something to smooth things over. So they've got something to munch while I'm chewing over my next question.

After that, it gets fuzzy. I'm big on knowledge -- I want to know a lot of things. But after three days, I suppose the questions will be exhausted and I'll have to move on. To where? The afterlife is a big fog, like we're all caught in a cloud. Perhaps we're in quadrants, overlapping quadrants because you know some people I don't, and so on. But you can reliably assume that if you bump into someone in the fog, that you know them. It would be a good opportunity to stab someone you didn't like, but I guess we'll all be past that then. Perhaps if you bump into everyone you know and hug them and exchange a few words of good will and affection, then eventually, the fog will lift.

That's as far as I've got on this afterlife thing. After the fog, I just don't know. And the fog part is pretty sketchy. Heck, the whole three-days-of-questions thing is sketchy.

It's a safe bet that something will happen that we don't expect, and that none of us know. But even if it's nothing, a true end, that's not so bad.

Happy New Year. I'm going to try not to die this year; you do the same. In addition, I'm going to ponder exchanging more words of good will and affection with people here on earth. I cannot guarantee anything. 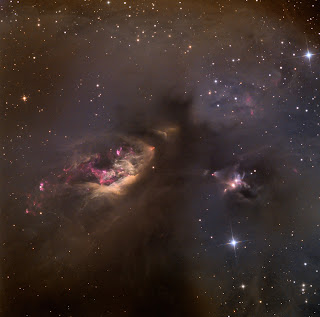